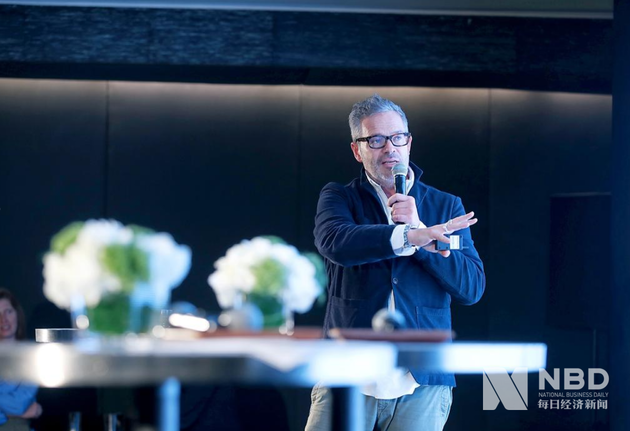 Tyler Brûlé at the conference on Monday [Photo/Zhang Jian (NBD)]

Nov. 5 (NBD) -- On Monday (Nov. 4), Monocle's founder and editor Tyler Brûlé, also a tastemaker, made a public appearance in China's southwestern Chengdu where a 'melting pot' is created for people to savor delicious cuisines and at the same time get closer to nature and development opportunities.

It has been three years since Brûlé's last visit to a city in mainland China and for the first time he set his foot on Chengdu, the modern and dynamic provincial capital of Sichuan province. "There sees limited number of brands in mainland China wielding global influence and people here may know little about Monocle," said Brûlé to National Business Daily (NBD), "But we envisage greater development in the market."

Co-hosted by the U.K.-based Monocle and Chengdu Media Group and organized by NBD, the first Monocle Cities Series in Chengdu aims to address issues around mobility, retail and dignified living in the form of a brisk, super-focused half-day summit.

According to Monocle, an increasing number of conferences are so tech-focused nowadays, making an attempt to solve the problems in cities with technology. But the lifestyle magazine believes that technologies such as big data are not the only answer to people's quality of life and there still sees an opportunity to go beyond that.

Looking nationally, Chengdu stands out from cities renowned for a 'global nomads' cluster and becomes the first stop of Monocle's Cities Series Conference. "A question is lingering on my mind: what do great cities mean for us?" asked Brûlé who spent 70 percent of his time annually on business travels.

The editor-in-cheif has a legendary personal experience. Brûlé went to the U.K. before graduating from university and joined BBC as a journalist. He was shot twice in Afghanistan. In 1998, Brûlé founded style and fashion magazine Wallpaper which was later acquired by Time Warner. In 2007 when the global publishing industry suffered from digital shock, he started Monocle which immediately became a must-read magazine for global elites.

Through returning to culture and tradition, and building open and inclusive urban architecture, cities are able to create a sense of engagement for global nomads who are living a mobile and international lifestyle. Brûlé's cross-cultural life experience shapes his multicultural identity and moulds him into a spokesperson of 'global nomad'.

"Macro-level and micro-level factors interact to impact cities," said Brûlé to NBD in an interview. This city observer divides objects of his observation into two types: epicurean and livable cities, and Brûlé held that attractive cities are those which not only offer daily convenience for people to commute and connect but also value small details in city usability.

Urbanism denotations are flooding in cities via billboards, posters, digital screens and social media but besides these, Brûlé finds a people-oriented city presents public space the most attractive.