Profile: A Brazilian martial artist's fight against epidemic in China

Sergio Silva, 42, is a veteran martial arts teacher, a professional designer, and a fledgling film director, and now he describes himself as a fighter against the novel coronavirus pandemic.

Silva made and posted a series of videos on social media platforms, cheering for people in the virus-hit Chinese city of Wuhan, recounting his firsthand experience of home quarantine in Beijing, as well as introducing China's effective measures in epidemic prevention and control.

He also cooperated with Kwai, a major short video platform under the Chinese internet giant Kuaishou, and launched a donation campaign to raise anti-virus supplies for a hospital and poverty-stricken communities in his hometown.

"When everyone helps each other, everything goes better. If everyone just does a little bit, we can finish the crisis very fast," Silva said. 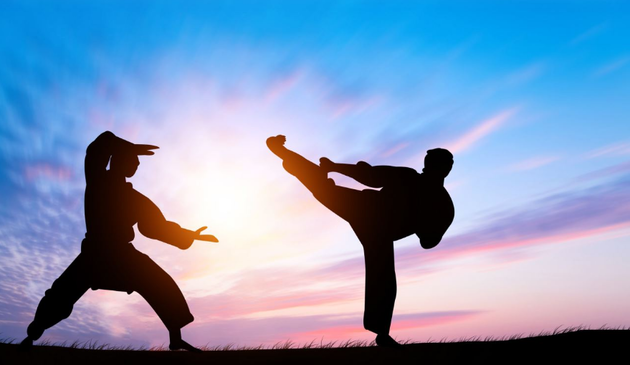 MAKING VIDEOS TO CHEER FOR WUHAN

Silva became a great fan of Bruce Lee, a renowned master of Chinese martial arts, when he was eight years old.

Adept in Brazilian jiujitsu (BJJ), Silva became a BJJ coach at the age of 19 in his hometown, the state of Bahia, after 15 years of training. But he had to quit the job after he went to Spain to study for his master's degree in design.

He came to Beijing in 2016 and works as a BJJ teacher. He is already a fourth-degree black belt.

"I was tired of working as a designer in the office. So I decided to follow my childhood dream of being a martial arts fighter in China," he said.

Silva was traveling with his friends in Japan and Italy when the coronavirus epidemic struck. After he returned to Beijing, he underwent a 14-day quarantine at home.

"We didn't expect the epidemic to be so serious at that time, but China's rapid response and stringent measures made me feel safe," he said. "The government did the right things to control the epidemic."

Like many of his Chinese friends, he followed the latest developments in the outbreak, especially in Wuhan, once the city hardest hit by COVID-19 in China.

"Wuhan was on lockdown to stem the spread of COVID-19 at the early stage of the epidemic. While people stayed at home to avoid crowd gathering and cross-infection, they tried to be happy and optimistic," Silva recalled. "The heroic city and people made a huge sacrifice to win the battle against the virus."

"But what struck me most was their sense of solidarity in the face of this hard time. People joined hands in fighting the epidemic with wisdom, action and morale," Silva said.

Silva browsed videos on life in Wuhan and he decided to make one too.

"We need to document people's suffering and misfortune, as well as intrepidity and fearlessness in the face of adversity. So I decided to make a video," said Silva.

Silva collected online clips showing Wuhan people doing lion dances, fishing out of indoor fish tanks, playing quoits and other creative activities to stave off the boredom of being stranded indoors. He also invited about 20 friends in the BJJ community in China to record short videos and cheer for people in Wuhan.

The 159-second video went viral after it was posted online in late March, attracting millions of views.

It inspired Silva to make more videos. Some are to teach viewers to wear masks properly and share local anti-virus actions.

"China's measures have set quite an example," said Silva. "Now that the virus has broken out in many other places, including our home country Brazil, we hope to share our anti-epidemic measures in China with our family, friends and more people."

"Not blaming but helping each other. We are ordinary people, but we can do an extraordinary thing together," said Silva.

With the epidemic ebbing in China, the martial arts teacher shifts his focus to his home country. Brazil's health ministry said Sunday that the country's COVID-19 caseload reached 61,888, with the death toll hitting 4,205.

Apart from making Portuguese videos to share his anti-virus actions, Silva is also assisting the local health department and institutions of Bahia in gathering anti-virus supplies in China.

After his videos gained online popularity, some helping hands reached out to him, including China's internet giant Kuaishou, which runs its short video platform Kwai in Brazil, boasting more than 7 million daily active users in the country. The platform said it will donate 20,000 medical masks to a local hospital in Bahia.

Silva also participated in a donation campaign initiated by Kwai on April 16, calling for users on the platform to help poor communities in his hometown Bahia, as well as those in Rio de Janeiro and Sao Paulo.

"Wear a mask and help next door. A lot of people need masks, food baskets, hygiene kits and financial donations," Silva introduced the campaign, which has a translated English hashtag of "BeaLeader" on Kwai.

"That's a really meaningful project. We deliver the donations to help those people in need and try to include those vulnerable groups in the fight against the pandemic," said Silva.

The Embassy of Brazil in China also spoke positively of the donation campaign, saying "we welcome the initiative as it is pleased to support all efforts in favor of fighting the pandemic that will benefit communities in need in Brazil."

Silva breathed a sigh of relief as a continuous donation of cash and supplies is being poured into his hometown from individuals and organizations in China and other countries and regions.

"I hope the epidemic will be over and everything returns to normal as soon as possible," said the martial arts teacher. "I miss the time of practicing grappling and ground fighting in the gym. I am eager to see my students again."