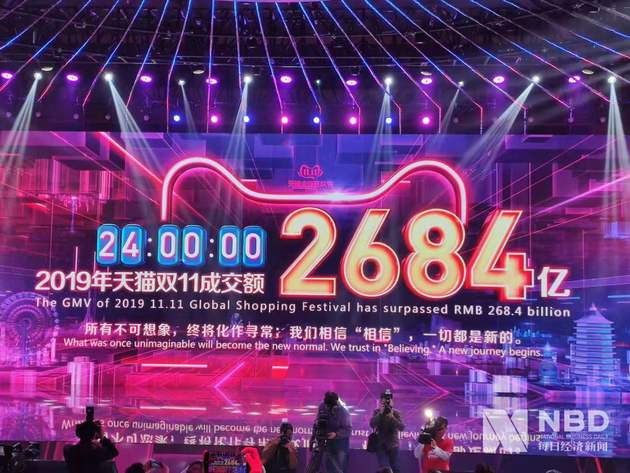 Nov. 12 (NBD) – The past 24 hours on Monday brought the "Double 11", the annual shopping extravaganza on November 11 in China, to a perfect windup with new glaring records.

While the GMV of e-commerce players reaching new high, logistics orders, an indispensable part of cyber shopping, also broke the record by exceeding 1.292 billion during this year's "Double 11".

NBD found that the third and fourth-tier cities and below are becoming one of the most focused battlegrounds this year.

It's worth noting that nearly 77 percent of the new active consumers on Tmall for the 12-month period ended March 31, 2019, which outnumbered 100 million, came from the third and fourth-tier cities and the countryside areas, according to Alibaba's financial report of fiscal 2019.

With consumers from those areas displaying vast consuming power, Tmall, JD.com and Pinduoduo offered tempting preferential schemes to allure those consumers and Pinduoduo even rendered subsidies worth 10 billion yuan.

As for products under such schemes on Tmall, over 7,000 products reaped respective transaction volume of more than one million and over 500 products each attracted more than 10 million orders within two hours on Monday.

JD.com delivered eye-catching performance as well. The average daily orders under such scheme during the shopping gala (from October 18 to November 10) presented a whopping growth of 274 percent compared with September.

Moreover, behind the booming consuming power in less-developed areas also lies the effort from e-commerce platforms to support the supply chain and upgrade the logistics networks by activating digital factories and production lines and allowing logistics services accessible to remote areas respectively.

Live-streaming is another highlight of this year's "Double 11" shopping frenzy.

The Q2 financial report for fiscal 2020 of Alibaba mirrored the ongoing trend of live-streaming in the e-commerce sector. According to the report, over half of the Tmall vendors resorted to live-streaming.

On the evening before the carnival, one of the most popular online influencers even garnered more than 35 million views during the six-hour-long live to peddle goods.

Statistics showcased that on Monday, the transaction volumes on Alibaba's shopping platform Taobao via live streaming within one hour toppled those on the whole day of last year, and reached over 10 billion in less than nine hours.

Apart from Alibaba, other players including JD.com and Mogu made foray into live-streaming sale as well. "What most distinguishes live-streaming-based e-commerce and the traditional one is that the supply chain for live-streaming must renew products more quickly, provide larger stock keeping unit, and respond sooner to the market," Luo Yi, vice president of Mogu, once told NBD.

An insider held that there's huge room for the development of live-streaming-based e-commerce. With the advent of 5G technologies, live-streaming will be accepted by more consumers.