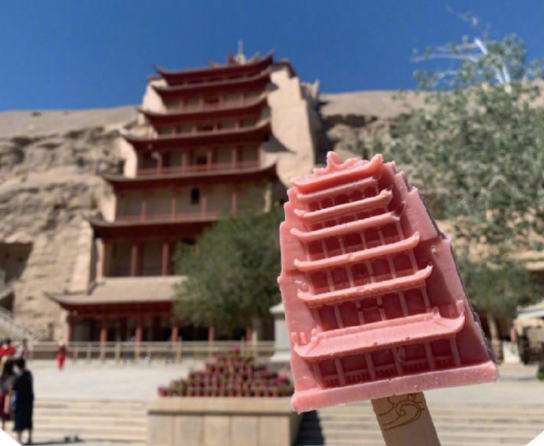 An ice pop posed in front of its prototype -- the Mogao Grottoes of Dunhuang. (Photo/Weibo account of People's Daily)

Heated competition among Chinese tourist sites amid the post-pandemic May Day holiday has left a cool taste in tourists' mouths.

Though summer is still a month away, travelers at tourist hotspots are snatching up ice pops shaped like local landmarks or iconic treasures as a novel way to mark their visits.

The sweet-tooth trend was ignited when some tourists flocked to social media to post pictures of ice cream bars in the shape of two millennia-old bronze masks unearthed from the legendary Sanxingdui Ruins on Saturday, the first day of the May Day holiday.

The ice cream, rolled out by the Sanxingdui Museum in Sichuan Province, boasts two flavors -- "bronze" and "excavation" -- which are matcha and chocolate.

Other tourist destinations in China soon joined the social media carnival with their own offerings, from Wuhan's Yellow Crane Tower to the catholic church in Qingdao, attracting tourists to take pictures of the ice pops in front of their prototypes.

"I would visit these scenic sites just for these ice cream bars," a netizen remarked on Sina Weibo, China's equivalent of Twitter, under a flurry of photos of multitudinous ice cream.

Yueyang Tower, a tourist magnet perching along the Dongting Lake in Hunan Province, said it sold more than 22,000 ice pops, priced at 18 yuan (2.8 U.S. dollars), in the shape of the ancient building during the five-day holiday.

"We hope the ice cream can give visitors a better taste of the ancient wisdom and life philosophy the building has stood for," said Li Caixia, a director of the tourist site's management.

Chinese tourist sites and cultural institutes have invested heavily into the development of creative cultural products, which is believed to contribute to the boom in cultural tourism in recent years.

"The trendy, unique and creative cultural products like the ice cream have won over many younger-generation consumers," said Zhou Yunqing, a sociology professor at Wuhan University. "It is also a manifestation of China's growing cultural confidence."

China's tourism market has seen a strong comeback during the May Day holiday thanks to the effective control of COVID-19. Total passenger trips made during China's May Day holiday are expected to reach 267 million, representing a significant increase compared with the same period last year, according to official data.

Nearly 18.83 million railway passenger trips were made on Saturday, the first day of the holiday, marking an increase of 9.2 percent from the 2019 level and hitting a new single-day high.