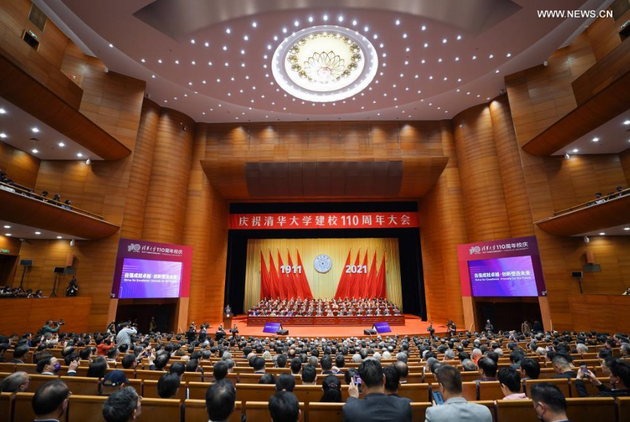 Located on the former site of the Qing Dynasty's (1644-1911) royal gardens in the Chinese capital of Beijing, the university became the first Asian institution to break into the top 20 in the 2021 Forbes world rankings.

Speaking to over 1,000 teachers, students and alumni at the anniversary celebrations, Qiu Yong, president of Tsinghua, said the university was established in an era when the Chinese nation suffered greatly, which pushed the institution to strive for saving the nation and making it strong.

"This year marks the centennial anniversary of the founding of the Communist Party of China. Tsinghua should improve the level of academic innovation and international exchanges, and make new and greater contributions to fully building a modern socialist China, pursuing the national rejuvenation and promoting the progress of human civilization," said Qiu.

Listed by Forbes as one of the world's most beautiful college campuses, Tsinghua boasts both traditional Chinese architectures and Western-style edifices.

Over the past 110 years since its inception, Tsinghua has cultivated pioneers in the fields of science, engineering, business, culture and politics.

Over the past three years, Tsinghua set up 25 rural vitalization work stations in 15 provinces and municipalities, which convened more than 1,500 teachers and students nationwide introducing science and technology to assist rural development programs.

Over the past 20 years, more than 360 Tsinghua alumni volunteered to teach in China's less-developed regions such as the Tibet Autonomous Region, and Qinghai and Gansu provinces, helping tens of thousands of rural students.

Liu Zhizhen, one of more than 50,000 Tsinghua students on campus, said the university emphasizes physical exercise and social practice, adding that he had participated in the National Day parade in 2019 marking the 70th anniversary of the founding of the People's Republic of China.

"Today we celebrated Tsinghua's 110th birthday, and soon we will celebrate the centenary of the Communist Party of China. A hundred years of relay and I am a part of it," Liu said.

Professor Stephen J Toope, vice-chancellor of the University of Cambridge, sent a video message wishing Tsinghua on its 110th anniversary.

"From its earliest days, Tsinghua has served as a bridge between East and West," said Toope, adding that he hopes the institution will continue to spread its wings of knowledge.

Noting that Cambridge is over 800 years old, Toope said global universities must stand alongside each other in partnership and solidarity.