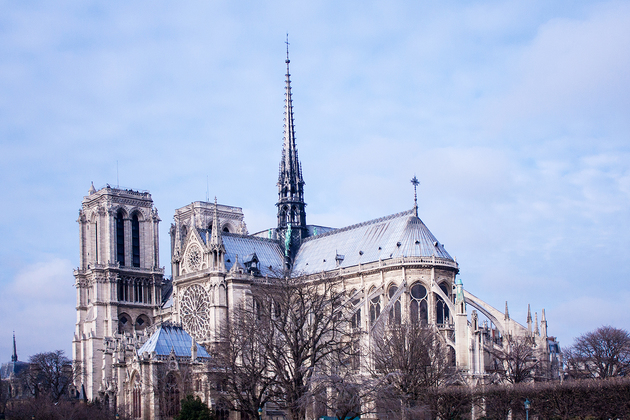 Two years after a ferocious blaze devastated Notre Dame cathedral in Paris, French President Emmanuel Macron on Thursday visited the site and reaffirmed that the 2024 deadline set for the renovation project will be met.

Wearing overalls, boots and a hard hat, Macron inspected the site, accompanied by Paris Mayor Anne Hidalgo and Jean-Louis Georgelin, a retired French Army general in charge of the reconstruction.

"We are all impressed with what we see," Macron told a group of workers. "In two years, an immense job of security, of expertise has been achieved."

On April 15, 2019, a huge fire broke out at the historic cathedral located in the heart of Paris and destroyed the spire of the building. Hours after the blaze, Macron promised that the cathedral, one of the finest examples of French Gothic architecture, would be rebuilt and reopen by 2024.

"The 2024 deadline will be met," he told Le Parisien newspaper in an interview published early on Thursday.

"What is important to me is that the planning of the work can be respected, with all respect to architects and craft professionals," he said.

Under the renovation plan, the first step is to dismantle 300 tonnes of massive pieces of an old scaffolding system, which had been installed for a prior renovation project and was badly damaged in the blaze.

Cleanup and stabilization were delayed by massive quantities of toxic lead and winter storms in 2019, then halted again in mid-March 2020 due to the national lockdown imposed to curb the spread of coronavirus.

The cathedral, whose construction began in 1163 and continued over a century, is part of the "Paris, Banks of the Seine" site inscribed on the United Nations Educational, Scientific and Cultural Organization (UNESCO) World Heritage list in 1991.