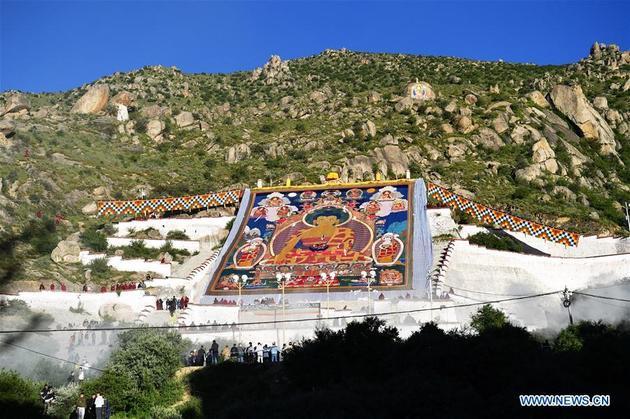 A traditional "sunning of the Buddha" ceremony marked the start of the festival, with a huge Thangka painting bearing the image of the Buddha being displayed on hillsides near the Drepung Monastery.

"I started queuing up after 6 a.m.," said Basang, from the county of Quxu. "The sunning of the Buddha is the most important activity of the Shoton Festival, so I am delighted and satisfied that I could take a look."

Tibetan opera performances, horse riding events, a photography contest and a walking assembly, are also scheduled during the festival.

Due to COVID-19 control and prevention measures, the activities will be held in different venues including Norbulingka, the summer palace of the Dalai Lamas.

The festival will continue until Aug. 25.

Shoton Festival, which literally means "yogurt banquet festival," is one of the most important festivals for Tibetans.

It dates back to the 11th century when it began as a religious ceremony for local residents to offer yogurt to monks completing their meditation retreats.