A guardian of qipao handicraft 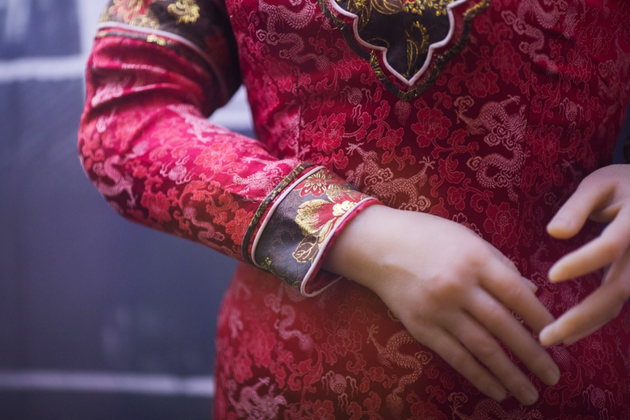 Zhang Jin's day usually begins with the clicks of sewing machines. Tailor-making qipao dresses for customers across the country, the day slips by before he knows it.

The qipao, a traditional Chinese dress for women, has long been popular for its unique status as a Chinese icon of elegance.

In 1987, at the age of 15, Zhang started to learn garment-making from the descendants of "Hongbang tailors," who are believed to have made China's first Western-style clothes. They are also thought to have fashioned the first Chinese tunic suit, also known as the Zhongshan suit, after Sun Yat-sen, a renowned statesman who led the revolution that ended imperial rule in China.

"We followed a conventional rule at that time," Zhang recalled. "As an apprentice, I was in charge of all chores, including cooking, cleaning and doing the laundry. Only if you did these for two years would you be allowed to learn clothes-making skills."

During his first three months, Zhang had to learn buttonholing skills and the correct use of a thimble, as well as ironing and hemming clothes every day.

Once he had a good grasp of these basic skills, Zhang stepped up to make pants.

"At the very beginning, I could make only three pairs of pants a day, then five, ten, and twenty pairs a day at the highest speed," Zhang said.

Finally, Zhang was allowed to learn qipao-making, which is known for its complexity and the extensive range of procedures involved. After a three-year training, he opened a garment-making shop in Jinan, capital of Shandong.

However, with the industrialization of garment-making in the 1990s, which brought low prices and a wide range of styles in polyester, demand for handmade clothes fell off. Zhang's shop was hit hard. He had to turn to other business, including selling fresh-cut flowers and operating restaurants.

Traditional Chinese garments regained popularity in 2001, after the meeting of the Asia-Pacific Economic Cooperation Forum in Shanghai, at which leaders from many countries wore traditional Tang suits.

Seizing the opportunity, Zhang returned to the garment industry in 2006. "Every family wants to wear traditional clothes during the Spring Festival, and more and more people are starting to wear the qipao," he said.

The qipao originated from gowns worn by women in the Qing Dynasty (1644-1911). Influenced by Western culture, the qipao changed continually during the early 20th century, becoming more fitted and body-hugging, with side slits that reached up to the thigh. During the 1930s and 1940s, it gradually evolved into its current form.

Unlike qipao dresses from the assembly line, Zhang tailors the garments on the basis of the customer's figure. He takes more than 20 measurements to ensure the uniqueness of every dress, and uses different fabrics and designs to suit each person's body shape and different occasions.

"Each qipao is a one-of-a-kind product," Zhang said.

He also believes that, while electric sewing machines are now common, they cannot replace hands. So, he insists on a combination of sewing by hand and using non-electric machines.

"A qipao must go through dozens of processes, from measuring to forming," said Zhang, adding that just a narrow piece of edging needs to go through nearly 10 procedures, taking three to four days to complete.

Zhang has adjusted his designs to keep pace with developments in aesthetic taste. The modern qipao has a zipper stitched into the side and a fake fastening on the front. Traditionally, the front was fastened by pankou knots, but these are now only used for decoration, which saves a lot of time.

In Zhang's view, the qipao is not just a simple dress that covers people's bodies, but a garment that embodies traditional Chinese etiquette and culture. With collars that stick upwards rather than folding, the qipao causes people to raise their heads and push out their chests. It also discourages bad habits, such as glancing right and left.

Zhang has many regular customers, including some that have never visited him in person. One customer from the southern Chinese city of Shenzhen sent her body measurements to Zhang. Based on these, Zhang sent her a sample qipao to try on, and the customer sent back the sample with her feedback for further adjustments. The customer ordered a dozen qipao from Zhang's shop in 2019 alone.

Learning that an increasing number of youngsters have become interested in the traditional qipao-making technique, Zhang has recruited more than ten apprentices, one after the other, teaching them skills in their spare time.

Zhang also participates in handicraft-themed lectures or seminars, through which he introduces qipao-making techniques, hoping that more people will learn about and fall in love with the traditional dress.