A day of panda keeper 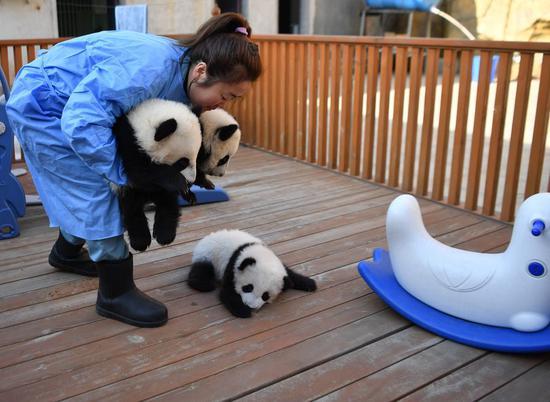 On a winter morning in the quiet, vast Qinling Mountains, Sun Mingwei carries bamboo in the bitter cold to panda enclosures.

Sun is a "panda keeper" at the Qinling research center of giant panda breeding in northwest China's Shaanxi Province.

Each day, Sun cleans the pandas' outdoor grounds and cages, brings them bamboo and feeds them.

An adult panda can eat up to 50 kg of bamboo a day, so it requires the keepers to work laboriously to load the food, causing a lot of distress to their backs.

"I like feeding animals, and I find pleasure in seeing the pandas enjoying their meals and having fun," said Sun.

Raising cubs is not only their mothers' duty but also the keepers'.

At 8:30 a.m., the cubs wake up and wait for powdered milk drinks prepared by Yu Haona.

Yu always holds the cubs in her arms and feeds them with a nursing bottle.

"We need to take them back to their moms three or four times a day so that they can have breast milk," said Wang Na, another keeper. 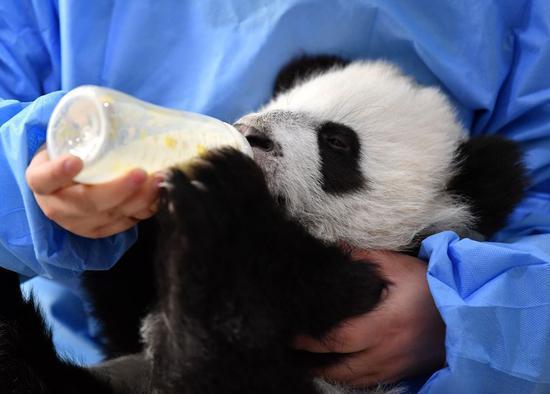 By noon, the center becomes a kindergarten for the pandas. When sunshine fills the yard, the cubs are taken outdoors to stretch. "They spend most of their time sleeping, which helps them grow," said Wang. "The cubs will get sleepy after being active for less than one hour."

Panda keepers have to take turns, as someone must be on duty 24 hours a day to take care of panda cubs. They usually begin to work at 8:00 a.m. and rest after 3:00 a.m. the next day when the cubs need to be fed for the last time.

They have to work in shifts until the cubs are weaned.

"Although we repeat the same work every day, it is quite interesting to watch pandas' expressions, actions and emotions, which always change," said Wang.

The keepers usually fall victim to scratches from the cubs. "The panda is an animal of Ursidae after all, and we often get vaccines due to injuries," said Wang, as she showed the scars on her hands.

In spite of the toilsome work, she cannot hide her smile when watching the napping cubs.

The center has become a platform for academic research and exchanges, talent cultivation and consulting services. It has also broken down technical barriers including reproductive hormone testing and mastered key techniques including panda cub nursing, artificial semen collection and insemination.