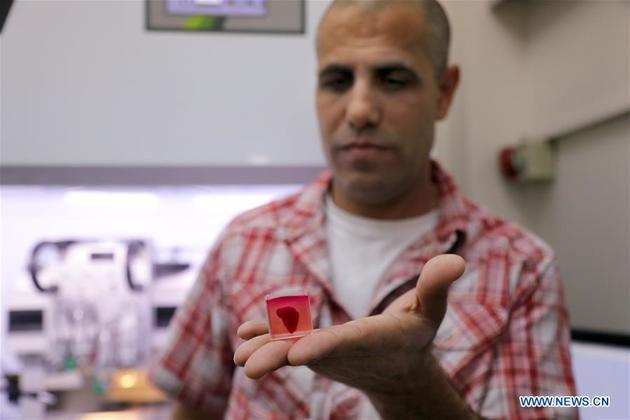 A professor shows a 3D-printed heart with human tissue at the University of Tel Aviv in Israel, April 15, 2019. Tel Aviv University scientists said on Monday that they have printed the first 3D heart, by using patient's cells and materials. The heart, which was produced in a lab, completely matches the biological characteristics of the patient's heart. It took about three hours to print the whole heart. Making a human heart model is a major medical breakthrough. However, the printed vascularized and engineered heart is approximately 100 times smaller than a real human heart. (Xinhua/JINI/Gideon Markowicz)

Tel Aviv University scientists said on Monday that they had printed the first 3D heart, by using a patient's cells and scans.

The heart, which was produced in a lab, completely matches the biological characteristics of a patient's heart. It took about three hours to print the whole heart.

Making a human heart model is a major medical breakthrough. However, the printed heart is approximately 100 times smaller than a real human heart.

Similar to a rabbit heart in size, the model demonstrates the potential of 3D printing technology for producing personalized tissues and organs.

"This is the first time that an entire heart was successfully engineered and printed with cells, blood vessels, ventricles and chambers," said Tal Dvir, a Tel Aviv University professor.

Heart disease is a leading cause of death among humans around the world. Heart transplantation is currently the only treatment available to patients with end-stage heart failure.

Given the dire shortage of heart donors, the need to develop new approaches to regenerate the malfunctioning heart is urgent. It seems that 3D printed hearts could be the forthcoming solution.

Research for the study was conducted jointly by Dvir, Assaf Shapira of Tel Aviv University's Faculty of Life Sciences, and Nadav Moor, a doctoral student in Dvir's lab.

Shapira, the lab manager, said: "We take a fatty-tissue biopsy from the patient and separate it to its components: cells and extracellular matrix.

"While the extracellular matrix is processed into a gel, the cells are genetically engineered to become stem cells, and then differentiate into heart muscle cells and blood-vessel-forming cells."

After that, the researchers mixed the cells with the gel to create "bioinks" that are loaded into the 3D printer. The printer was also loaded with CT and MRI scans from the patient.

The scans generated high-resolution constructions of the heart, with patches that match the anatomical and biochemical features of the patient, thus reducing the chance of rejection or malfunctioning in the future transplantations.

The research is now focused on studying the behavior and functionality of the printed patches and hearts under controlled conditions in the lab and upon transplantation in animal models.

An artificial heart is expected to lower the risk of implant rejection in comparison with real heart transplantation from one human to another, a primary reason for unsuccessful treatments.

"Ideally, the biomaterial should possess the same biochemical, mechanical and topographical properties of the patient's tissues," said Dvir.

The researchers are now planning on culturing the printed hearts in the lab and "teaching them to behave" like hearts, Dvir said. The next step in their research would be transplanting 3D-printed hearts in animals.

Meanwhile, the lab heart does not have a pumping ability. Currently, the cells contract, but they do not work together. There are many challenges before the first human-made heart would be transplanted.

One of the major challenges is to make a mature, human-sized and fully functional heart, and it needs the creation of billions of cells instead of millions as in the small model the university produced.