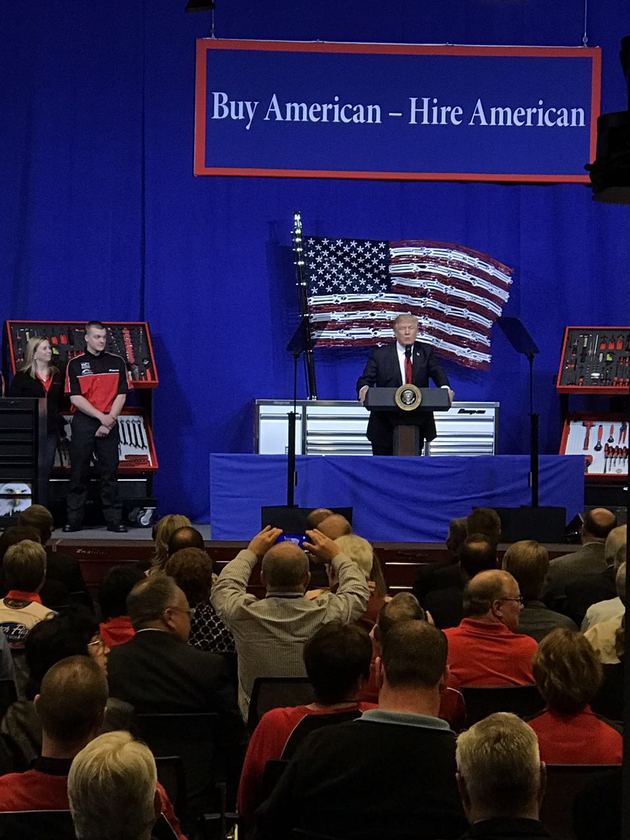 U.S. President Donald Trump paid a visit to Snap-On HQ in Kenosha Tuesday. He signed an executive order there directing federal agencies to implement the "Buy American, Hire American" policy. The order aims to bolster protections for American-made goods and calls for a review of H-1B visa program for skilled workers.

The CEO of Snap-On, Nicholas Pinchuk, delivered a speech on American manufacturing industry and its opportunities under Trump Administration.

After that, Trump recalled the moment he won Wisconsin's 10 electoral votes and made examples to illustrate the efforts he has made in the first 90 days. In terms of the buy and hire American order, there are more steps to go through, Trump said.

After delivering his remarks, he signed an executive order to rein in H-1B visa. The H1-B visa program is intended to bring skilled workers in certain fields to the US, but critics say that employers have abused the program to hire workers who will accept cheaper pay than Americans.

Many Indian-based outsourcing firms are taking jobs away from Americans. Right now, H-1B visas are awarded in a totally random lottery and that’s wrong,” he said. “Instead, they should be given to the most skilled and highest-paid applicants.”

A student coming from China told NBD that international students who plan to work in America pay much attention to the reform of H-1B visa. Employer is required to get at least 50, 000 U.S. dollars a year before applying it, he said. But many foreigners working in America cannot get that much. Then you have to offer materials to explain why you cannot be replaced. Locals often complain that H-1 B visa holders are taking jobs away from them. US congress is likely to consider giving foreign workers a raise to make it harder for outsourcing workers to replace Americans, he added.

No concrete cases are reported at the moment

Trump’s order also empowers federal agencies to reexamine loopholes in the government’s procurement process. The order will tighten the waivers and exemptions that agencies use to get around procurement laws that favor American-made goods, and require agency heads to sign off on those waivers. Trump himself called the order “a powerful signal to the world” that “finally puts America first.”

Thomas Wright, director of the Project on International Order and Strategy, told NBD that Trump views the global economy very differently from most presidents. Like most presidents were very cautious about free trade and open global economy. But Trump tells much more narrow definition, which is taking manufacturing jobs back to the United States. And Trump is sending a message to other countries, that he wants to ensure jobs particularly manufacturing jobs, he added. And Trump is sort of taking that as a big win and hyping it up. While we don't know yet to the great degrees he's actually succeeding and there is a worry that companies made those decisions to please President. "You know it may not make economic sense and it could whip cautions in aspect of economy, so I think we need to wait and see on that," he added.

In terms of "bringing manufacturing back to the United States", is there any concrete case? Wisconsin congressman Glenn Grothman told NBD that there is no concrete case at the moment for this is a new project. He also mentioned that Wisconsin ranks second in the nation for manufacturing jobs and that why Trump pays a visit here. When he is asked to rate for Trump, Glenn said actually trump is trying his best to deliver his promises. To me, he is more like a Roman gladiator, Glenn added.