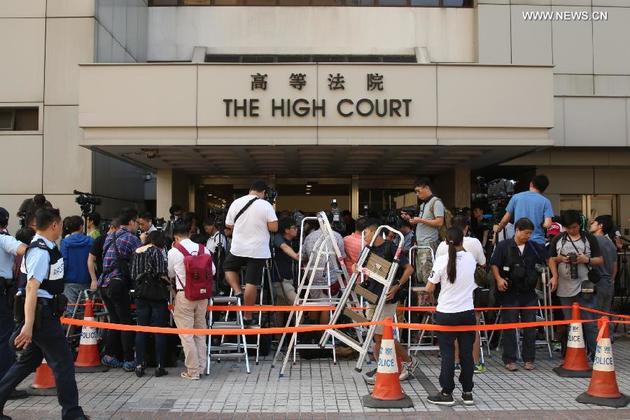 HONG KONG, Nov. 15 (Xinhua) -- Hong Kong's High Court on Tuesday ruled that two legislators-elect, who used insulting language against the Chinese nation while taking their oaths last month, must be disqualified as lawmakers.

The ruling came after the Hong Kong Special Administrative Region (SAR) government and Chief Executive Leung Chun-ying filed a judicial review on Oct. 18 against the decision by the president of the Legislative Council (LegCo) to give the pair a second chance to be sworn in.

Justice Thomas Au ruled in favor of the SAR government, finding that the oaths purportedly taken by the two are invalid and void and have no legal effect.

The duo manifested a clear conduct to refuse, thus "decline," to take the LegCo Oath, whether in form or in substance, as required under the Basic Law of the Hong Kong Special Administrative Region and the Oaths and Declarations Ordinance (ODO), according to the verdict.

The court also ruled that the president of LegCo has no power to re-administer or allow for re-administration of any future oath-taking by the two.

In addition, it barred the duo from claiming to be entitled and/or acting as members of the LegCo.

The two legislators-elect, Leung Chung-hang and Yau Wai-ching, used derogatory language insulting the Chinese nation when reading out their oaths at a swearing-in ceremony on Oct. 12. Yau also displayed a banner proclaiming "Hong Kong is not China."

Their provocative behavior has prompted the top legislature of the country, the National People's Congress (NPC) Standing Committee, to issue an interpretation of Article 104 of the Basic Law of Hong Kong SAR on Nov. 7, clarifying the implications and requirements of oath-taking by Hong Kong legislators-elect.

According to the interpretation, oath-taking must comply with the legal requirements in respect of its form and content. An oath taker must take the oath sincerely and solemnly, and must accurately, completely and solemnly read out the oath prescribed by law.

The interpretation is binding on all Hong Kong courts and the courts should give effect to it, according to the court ruling.

If an elected LegCo member intentionally declines to take the LegCo Oath as prescribed under the ODO, the oath taken is invalid and he or she shall be disqualified from assuming the office, it said.

In response to media enquiries, an SAR government spokesman said the government noted the court's judgment on the construction of the relevant provisions in the ODO and the Legislative Council Ordinance in light of Article 104 of the Basic Law.

"We will consider the Interpretation of Article 104 of the Basic Law of the Hong Kong Special Administrative Region of the People's Republic of China by the Standing Committee of the National People's Congress, the judgment and the way forward," said the spokesman.

Hong Kong Chief Executive Leung Chun-ying welcomed the court's decision and said the SAR government would act in accordance with the law.

LegCo President Leung Kwan-yuen said he respects the judgment of the court.

"It is an unfortunate incident. But it is a good thing that the court clarified the law in this area," he said. "I sincerely hope that lawmakers and society can refocus on the affairs of the Legislative Council and its work in monitoring the government."

The ruling came amid a public outcry in and outside Hong Kong against the deliberately challenging behavior of the two, as a joint signature drive to demand that they apologize and retract the insulting comments have so far gained support of over 1 million people online.

Meanwhile, an anti-independence rally in support of the NPC Standing Committee's interpretation of the Basic Law held in Hong Kong last Sunday saw the participation of more than 40,000 people.