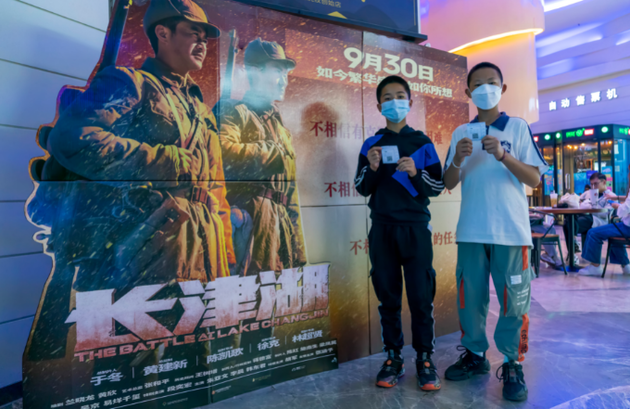 Approximately 119 million moviegoers have so far watched the film in cinemas across China, according to the movie data platform Maoyan.

It is the highest-grossing title so far this year, both in China and globally, immediately followed by domestic comedy "Hi, Mom," which raked in 5.41 billion yuan.

Jointly directed by Chen Kaige, Hark Tsui and Dante Lam, "The Battle at Lake Changjin" is set during the War to Resist U.S. Aggression and Aid Korea (1950-1953) and tells the story of Chinese People's Volunteers (CPV) soldiers fighting bravely in freezing temperatures in a key campaign at Lake Changjin, or Chosin Reservoir.

The story of young warriors willing to risk it all to defend their motherland against the world's best-equipped army, despite the lack of food and warm clothing amid the bitter cold, has moved many moviegoers to tears.

"The Battle at Lake Changjin" is currently the second-highest-grossing title of all time at China's box office, trailing only the 2017 Chinese action film "Wolf Warrior 2," which earned 5.69 billion yuan, or 870 million U.S. dollars per foreign exchange rates back then.

The war epic is set to have a sequel called "Water Gate Bridge," which will see the return of stars Wu Jing and Jackson Yee, as well as other leading members of the original cast, according to an official announcement made via social media in late October.

The new film, for which a release date is yet to be announced, follows CPV soldiers of the same company as they take on a new task. And this time, their battlefield is a crucial bridge on the retreat route of American troops.