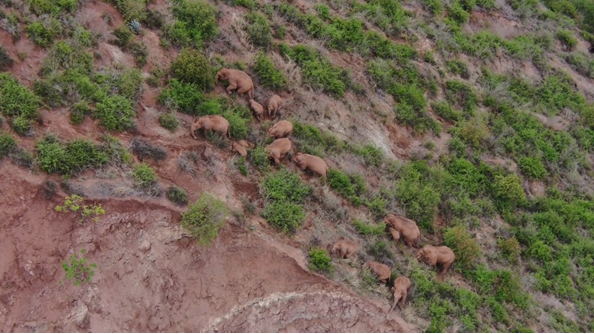 The herd of 14 wild Asian elephants roaming around in southwest China's Yunnan Province is approaching their traditional habitat.

At about 8 p.m. Sunday, the herd crossed the Yuanjiang River with artificial guidance, according to the headquarters in charge of monitoring their migration.

The herd could have not crossed the Yuanjiang River without help as the water level rises in the rainy season. More efforts will be made to ensure the security of the herd on their way back, according to the headquarters.

It has been around 17 months since the herd bid farewell to their original habitat in a nature reserve in Yunnan's Xishuangbanna Dai Autonomous Prefecture.

Wild Asian elephants, a flagship species in the rainforest, are under A-level state protection in China. Thanks to stronger environmental and wildlife protection efforts, its population in the country has grown to about 300, mostly scattered in the province of Yunnan.