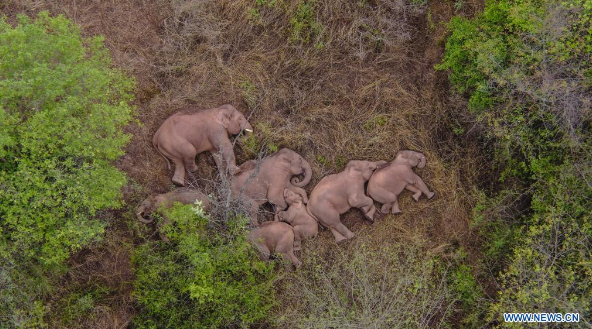 A herd of wild Asian elephants have made a temporary stop along their migration in the outskirts of the southwestern Chinese city of Kunming, authorities said Monday.

Of the 15 elephants, one male has broken free from the herd and is currently about 4 km to the northeast of the group, according to the on-site command tracking the elephants.

Continuous rainstorms are complicating efforts to monitor the elephants in Kunming's Xiyang Township.

Authorities have fed the elephants 2 tonnes of food and have evacuated local residents.

The elephants traveled approximately 500 km from their forest home in Xishuangbanna Dai Autonomous Prefecture before reaching Kunming, the provincial capital of Yunnan, on Wednesday night.

According to the latest census, Kunming has a population of 8.46 million.

For over a month, authorities have sent police to escort the herd, evacuated roads to facilitate their passage and used food to distract them from entering densely populated areas.

Asian elephants are under A-level state protection in China, where they are mostly found in Yunnan. Thanks to enhanced protection efforts, the wild elephant population in the province has grown to about 300, up from 193 in the 1980s.