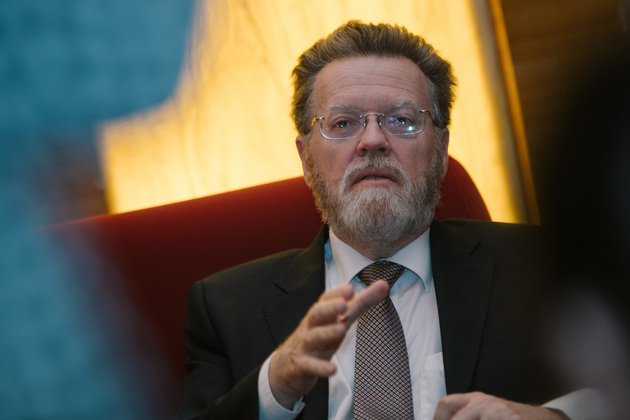 Keith Burnett, Fellow of the Royal Society of the United Kingdom, Former Vice Chancellor of University of Sheffield, and Council Member of the Confucius Institute Headquarters, U.K., attends the two-day event to share his insights about Confucius institutes and Chinese culture.

People are grateful for the Confucius institute and the staff, he added.

Burnett is committed to enhancing cultural communication between China and the U.K., and the Sheffield Confucius Institute has become one of the most influential Confucius institutes in the U.K. and around the Europe.

Burnett introduced that there are a lot of people in Sheffield region are learning Chinese. The Sheffield Confucius Institute has opened nearly 200 classes and about 14,000 citizens have studied Chinese.

"China has a vast territory rich in resources, with extraordinary culture, history and philosophy. How can we build links or form business cooperation with China if we don't learn Chinese?" Burnett said to NBD.

The Sheffield Confucius Institute initially focused on teaching basic Chinese conversation and introducing Chinese culture. "Then we decide to expand into business culture and etiquette and help people who want to do business with Chinese companies or partners explore business opportunities," said Burnett.

The institute also forged partnerships with local companies in areas such as healthcare and industrial efficiency that bring common challenges to human beings.

"We are working with local companies and municipal authorities, as well as Chinese governments and companies," Burnett explained, taking the University of Sheffield's Nuclear Advanced Manufacturing Research Centre as an example, an institution which has forged nuclear power collaborations with Chinese enterprises through the Sheffield Confucius Institute, spurring the U.K.'s industrial development.

No difference between Chinese dream and British or African dream

Burnett pointed out that besides pursuing further progress in teaching Chinese language and culture, Confucius institutes could also seek innovation in helping people cope with the modern business relations and strengthening communications in the science, technology and business sector in the future.

NBD noticed that Confucius institutes are conducting such innovative practice, linking China with countries along the Belt and Road.

For instance, the Confucius Institute at Khon Kaen University in Thailand has set up a language training program on high-speed rail Chinese and the institute in Ukraine trains local staff for Ukraine International Airlines.

Besides, the Confucius institutes in countries including Germany, the Czech Republic and Moldova, facilitate collaborations between schools and states and enhance cultural communications.

Since the Confucius Institute was founded in 2004, it has played a unique role in propelling the multicultural development and building a harmonious world and become a crucial platform for the world to learn about China.

So far, 548 Confucius institutes and 1,193 Confucius classrooms have been established in 154 countries and regions. There are 46,700 part-time and full-time teachers at home and abroad and 1.87 million students are taking face-to-face courses.

In Burnett's view, the Chinese faculties of Confucius institutes are excellent representatives, making people in the global communities feel the kindness and dedication of China.

"Chinese dream is no different from the British dream or Africa's. We all hope to give our children and grandchildren the best possible future and build a peaceful and prosperous world for them. Confucius institutes can help build the bridge between China and the world and make our common dreams possible," said Burnett.