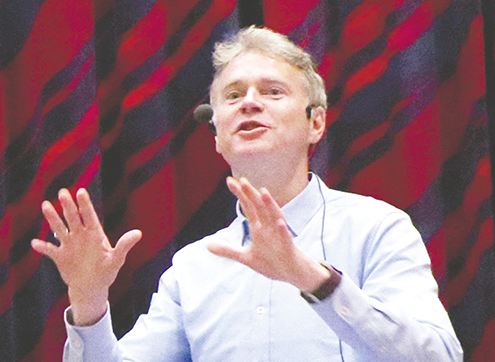 Richard Lewis, former Convenor for Culture and Sports at the City of Edinburgh Council and former chairman of Edinburgh International Festival Committee, will make a speech on building a world cultural and tourism city with the aid of art and successful events.

Regarded as the Olympic Games in the cultural industry, Edinburgh International Festival is held annually in Edinburgh in August.

A festival should highlight a city's strengths

Lewis, a conductor, coach, composer and lyricist, travelled from city to city while he grew up and work in different places.

Born in Sydney but educated in Edinburgh, Lewis went on to study music at Magdalen College, Oxford, and later completed a master's degree at Edinburgh University. He spent one year at the National Opera Studio in London and studied conducting under David Parry.

Then he acquired a full-time position at the National Theatre in Mannheim, Germany, where he worked as a conductor and repetiteur.

Since 2001 Richard has worked as assistant to the famous Hungarian conductor Adam Fischer at the Haydn festival in Eisenstadt, Austria. He also assisted Adam on all of Wagner's mature operas in Budapest's celebrated Wagner Festival from 2007.

In 2005 and 2009, he worked on a new production of Cosi fan tutte with the renowned German director Claus Guth at the Salzburg Festival.

Lewis attempts to learn about the culture of every city he stayed.

When asked how to choose the right way to allow more people understand and resonate with a city's culture, he said the best approach is to find out what the people in the city itself think of their city and how they would describe it to outsiders.

Boasting abundant experience in participating in festivals, Lewis shared his views about how to create and develop a festival which particularly features a city like Chengdu.

"Ask yourself, what makes the city interesting for people NOW and then design a festival highlighting those strengths," he said. "After that, the job of promoting it-being 'authentic' and rooted in the fabric of the city-should flow naturally."

Besides, Edinburgh Festival Fringe, the world's largest arts festival, can be a model Chengdu could follow, Lewis mentioned, explaining that the fringe has been allowed to develop independently, giving anyone the chance to perform at the festival. Thus, a non-curated Chinese arts festival can encourage young Chinese artists to come up with anything their imaginations can dream up.

When Lewis was at Culture and Sports Committee of the City of Edinburgh Council, he led the strategic planning and comprehensive development of the cultural creative industry and festivals in Edinburg became more influential than ever.

The management and creation of the 12 festivals in Edinburgh has been significant to the city’s artistic reputation. The 12 festivals-happening at different periods throughout the year-have had the effect of bringing in investment, jobs and people to the city that would simply not be there otherwise, Lewis told NBD.

"It is Edinburgh's USP, and without effective event management it simply would not happen," he admitted.

Apart from the international festival and the fringe, Edinburg has gradually added other festivals that draw on the connections between the city and big names, including Scottish historical novelist Walter Scott and Robert Louise Stevenson, author of the children's classic Treasure Island, both of whom were born in Edinburgh.

The city also created Burns Supper in celebration of the life and poetry of the romantic poet Robert Burns.

Lewis also presented the reason for the UK's success in promoting culture and creativity into economically valuable industries. The UK system requires artists to be entrepreneurial - something which tends to lead to artistic originality, he said.