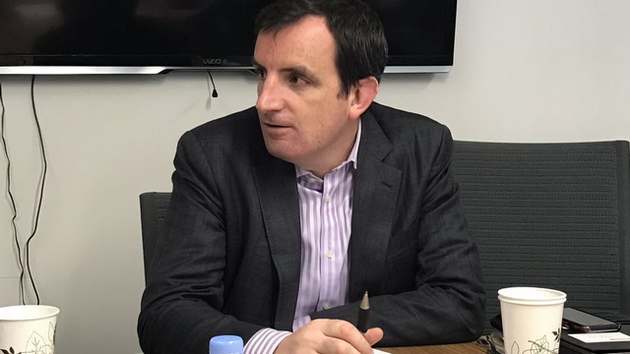 Thomas Wright is fellow and director of the Project on International Order and Strategy, as well as a fellow in the Center on the United States and Europe, at the Brookings Institution. He is also a non-resident fellow at the Lowy Institute for International Policy.

On behalf of NBD reader, our correspondent Sun Yuting asked a question to Thomas Wright while she takes part in journalist training courses in Washington, D.C.

Sun Yuting: Will the "bringing manufacturing back to the United States" affect China? And how will it affect?

Thomas Wright: Trump views the global economy very differently from most presidents. Like most presidents were very cautious about free trade, open global economy, they see benefits for American in that. Trump tells much more narrow definition, which is manufacturing jobs back to the United States, more favorable balanced trade with countries. And he is sending a message to other countries, that he wants to ensure jobs particularly manufacturing jobs. I think what is happening now is companies are sort of pretending to do that, whether they are actually doing or not is another question, but they are taking old announcement and saying new announcement or maybe they are exaggerating announcement that they have. Some of them are law-making manufacturing announcements. And Trump is sort of taking that as a big win and hyping it up. We don't know yet to the great degrees he's actually succeeding and there is a worry that companies made those decisions to please President, you know it may not make economic sense and it could whip cautions in aspect of economy, so I think we need to wait and see on that. I think his economic view is sort of rooted in the past in that somebody's jobs are not coming back because of a nation, another issue, just not, just because of internet free trade or anything like that. I don't know the impact directly on China of the manufacturing thing, I think the real risk in the U.S.- China economic relationship is that the U.S. imposes tariffs or launches trade war, I think that will be very bad for China but also extremely bad for United States and for global economy and Trump has been open to that.